By: Alexandra Garcia and Aaliyah Herrera 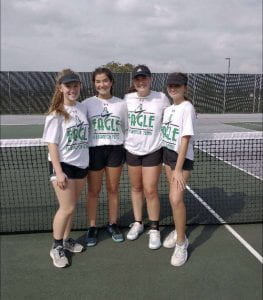 We interviewed Iliana Solrazano, a player on the PHS Tennis team and she had great answers to the questions asked, when asked “What gets the team motivated for practice?” she answered back with “When coach Everett gives them competitive games to practice with or when they play fun rounds of plays for tennis.” Iliana says her favorite part of tennis is being able to play with friends and getting to see them plus them spending time together. She  decided to play tennis this year (2021) because she feels it has come natural to her. Solrazano has  a natural passion and talent for tennis. Iliana says the tennis team tends to get  irritated by the line judge calling an out or having to call someone to check in or out for the play. An improvement Solorzano the tennis player believes could help would be the support, and to be more professional and skilled. The team is already working tirelessly with a little more motivation to achieve those improvements.

Head Tennis Coach Everett stated, “So we ended the season.. In third place and we had a really good first season for my first year coaching.” He says that a typical day of tennis practice starts at about 4:15.. The tennis players start warming up and then they will do some games and drills and then we end with a team meeting every practice. When asked what he thinks could improve for the team he replied with “Introducing new drills and different types of games would help kind of give us more team building stuff.” Another question for Everett was “What do you expect out of your players ?” He said, “While we’re at practice I want everyone to be 100% and honestly follow what I try to lead as.” We asked the coach about the type of coaching style he uses. He replied “My coaching style is kinda pretty laid back and I like to have opinions when I’m doing stuff so I’m not authoritative. I ask for stuff in return and I expect it back.” The final question we asked was “How do you motivate your players?” He states that it again involves the way he coaches and he motivates them “by being chill and giving feedback and also asking for opinions on drills and stuff they do.”As from what we can see the tennis team is a very pulled together and motivated team of players. They have the skills and practice that HS needs.