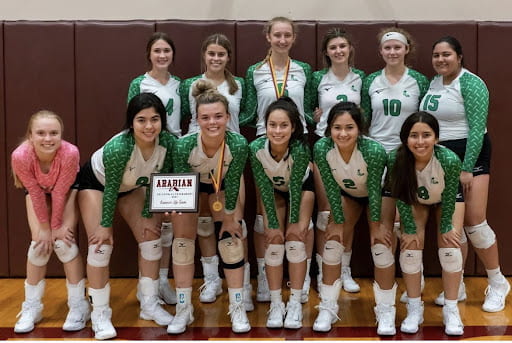 As the 2021-2022 school year kicks off, the Pleasanton volleyball team has dominated on the court. Scores so far show a promising season ahead for the varsity, JV, and freshman teams. On just the second day of school, the Lady Eagles faced Devine and Burbank high school. For the varsity team, a double win sets the scene for the season to come. The JV team won over Burbank and lost to Devine. Unfortunately, the first game jitters got the best of the freshman team who lost to both Burbank and Devine.

Later on the first week of school, the Varsity team traveled to Edgewood to participate in a tournament. This 3 day tournament would prove to be rewarding. After an incredible collection of wins over Memorial, Randolph, Del Rio, and Fox Tech, the team advanced to the first bracket, where they earned an advancing win over Hidalgo, next in the second bracket the girls beat Randolph. This win advanced them to the championship game. After a good fight with Del Rio, our girls came out Edgewood tournament champions!

The following week, on Tuesday August, 17, the Varsity, JV, and Freshman teams faced D’hanis high school. This night was a rewarding night after all 3 teams gained a win.

On August 19-21, the Varsity team traveled to Devine to partake in another tournament. After astonishing wins against D’hanis, Natalia, and Crystal City in pool play, the varsity team beat Edison in the first bracket play. Gaining another win against Ingram in the second bracket to advance to the championship game. Unfortunately, the Eagles were not able to pull forward for a champion win against Feast high school, but still managed second place in the tournament. All tournament selections include, Sadie McAda, and Tess Underbrink, a very respectable accomplishment on their behalf.

On Tuesday, August 24, the Lady Eagles traveled to Hondo high school to face the Owls. After a long fight, the varsity team scores a 3-0 win. Unfortunately for the JV and Freshman teams they were unable to get a win.

At a tournament in Persall, the varsity eagles pulled two impressive wins against Dilly and Sam Houston high school. Shortly after, in 3 long sets, the Eagles lost to South San, still they didn’t let this get them down. After two more wins against Persall and South San in the bracket play, our Eagles advanced to the championship game. In the championship game, the Eagles earned an impressive win against Randolph in 2 sets, earning first place of the tournament. All tournament selections for this tournament include Sadie McAda, Tess Underbrink, and Paige Stofa.

Coach Bird, the JV coach, keeps an optimistic outlook on the season as the teams do so well saying, “so far off to a pretty good start!” Coach Bird is confident in his players as the season progresses, saying “they all do a really good job” and that he’s “excited to see how district takes shape.”

This has been an amazing season so far and will hopefully only get better as the season progresses. We wish the volleyball team good luck as they continue to play games and make the school proud. As Coach Bird says “Come out and support!” Pride! Pride!