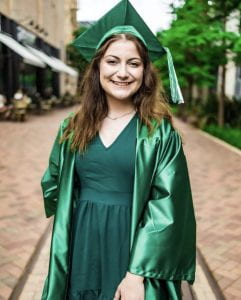 April Findley is one of the most kind, generous, and humble faces at PHS. Over the past 4 years April has worked incredibly hard in all of her classes. This work has paid off and April will graduate as the highest ranking girl of the class of 2021! April will be attending Texas A&M where she is studying Mathematics to, someday in the future, become an actuary. April is the student council president, an active member of NHS, a member of the Trio Upward Bound program, and a member of the 2021 class officer cabinet.

Along with working very hard and balancing your time well, another thing that can help you stay ahead and create motivation are the people all around supporting you. The teachers at PHS can play a huge role in influencing the students. For April, three teachers had the biggest influence on not only her success in high school, but on the person she is today. April credits her motivation to actually do well in school to Mr. Roberson. Freshman year, April categorized herself as a pessimistic person but through the year she grew.  She says Mr. Roberson “opened my eyes to the world of optimism.” and that “he gave me a lot of encouragement and motivation.” Although Mr. Roberson is one of the main reasons April is going to study mathematics, Mrs. Bast also played one of the biggest roles in April’s decision. April says that Mrs. Bast “really pushes you to do your best and she like believes in you 100%,” She also credits most of her motivation and success to the lengths Mrs. Bast would go for her students. Lastly, having one of the most influential positions in April’s life is Mrs. Moos. April says “Mrs. Moos is always there for me just helping me” She has given April countless opportunities and good memories. “She is one of the best workers at PHS. She believes in her students, she’s just so sweet, she’s just overall the most caring person I know, I love Mrs. Moos, she is the best.” These three teachers’ life lessons, amazing memories and motivation will be ones April remembers for the rest of her life and lives her life following.

Although high school is only four short years of one’s life, they are memorable and important to growth. Being involved in many things resulted in April having a very memorable high school experience. April at one time was an avid runner and it paid off. As a freshman, April advanced to regionals in both Track and Cross Country which soon became one of the best memories April has of high school. “It was a crazy moment for me,” she states, “I was like “what the heck” it was crazy for me.” Alongside being involved in Track and Cross Country, April was an active and successful member of the schools debate team. Advancing all the way to state as just a freshman. Even though she was really successful in these events, April feels her greatest high school success was being the highest ranking girl, and student council president. “It was awesome.” Both of these require a lot of work and dedication and April did amazing.

For all 4 years of high school April has been a member of the TRIO Upward Bound program. She credits this program for the preparation and knowledge she has of college and the application process. “That was probably the most I have ever been prepared for something.” She states. The TRIO program helped her with college visits, essays, scholarships, preparing them for picking degrees and majors and much more. She says they “They told me everything I needed to know.” Alongside this, the school counselors have also helped a significant amount in April’s high school to college transition. She went to Mrs. Evans with many questions and Mrs. Evans always proved to help. April says, “the counselors are really helpful, they really help a lot.” April has had somewhat of a smooth transition and she says all you “just have to ask.”

Both after and during college April intends to participate in internships. She would also like to get a masters degree to narrow down her degree from general mathematics to eventually become an actuary. An actuary is someone who does statistical analysis, “basically they just like do risk analysis for bigger companies.” This is a career April has a lot of interest in and has always thought about. “I think it’s something really interesting,” she says, “I don’t think I would get bored.” She finds the risk factory of the job the most interesting and exciting part of being an actuary.

Through high school, everyone faces many difficulties that might hold them back or discourage them. April’s most important piece of advice is to not worry yourself crazy over GPA. She says “always try your best and try to get the higher grade but don’t kill yourself for it.” She feels it cuts down on your social life, your friends’ community and family time. She stressed that in high school you should always, “take harder classes to challenge yourself and prepare yourself, but don’t let it kill you, don’t let it push you so hard that you have nothing left.” Always enjoy your time no matter what. You only have so much time. April leaves the classes to follow with the strong statement of, “It’s ok to not be able to do it all.

Congratulations April on everything you have accomplished at Pleasanton High School. We on campus could not be more proud of the things you have done. We wish you the best of luck and know you will do great things. Pride! Pride!