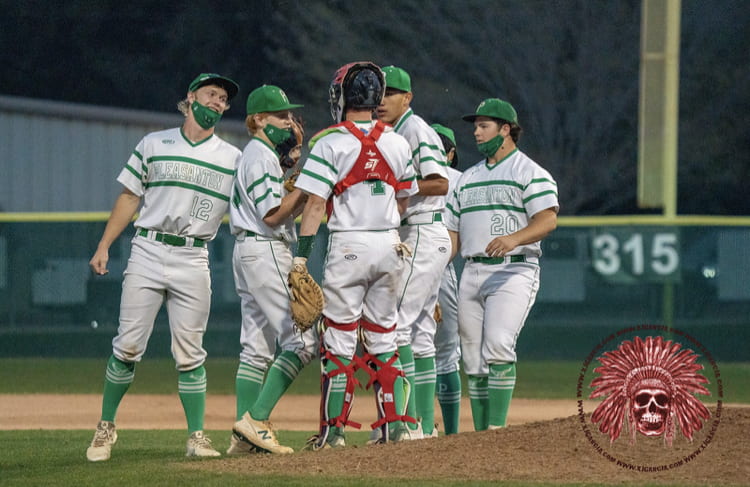 The Eagles gather together for a pep talk. PC: Jay Garcia

The Pleasanton Eagles Boys’ Baseball team has done incredibly well this season, finishing their first round of district and moving on to the second. The boys have started April strong, beating the San Antonio Highlands 8-1 on April 1st. The Eagles played well, and carried that into their next game on April 5th against the San Antonio Homeschool Wolverines, also defeating them with a final score of 9-2. The Eagles began their district season on April 9th, and won 9-5 against the Somerset Bulldogs. The boys have kept up the good work, playing a non-district game on April 10th against Corpus Christi Miller and triumphing over them 7-2. The next district game against the Hondo Owls on April 13th ended in a 1-0 win. Their season has stayed successful, earning another non-district win on April 16th against Devine 11-1, ending the first round of district. The second round of district has only just begun on April 20th, winning over the Somerset Bulldogs once again with a score of 7-2.

The Eagles have done really well this season, playing through adversity and making it out 1st in district so far. The team has even been recognized in the San Antonio VYPE Magazine’s Top 10 Baseball Teams in the San Antonio Area from 1A-4A. The Eagles are ranked number three, just below Navarro in first and Shiner in second, which is an amazing job! Great job boys, and keep up the great work in playoffs! Pride Pride!