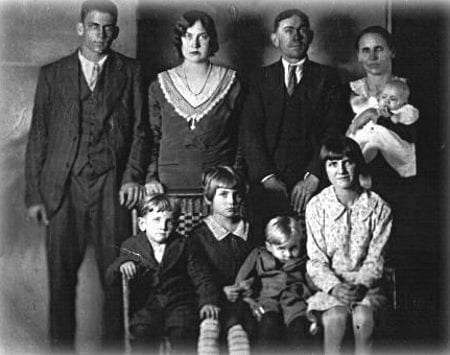 The Lawson family portrait taken shortly before their death.

Although Christmas day is one of the most festive and happy days of the year, for one family, things could not have gone worse. The Lawson family consisted of Charles, age 49, Fannie, Charles wife, age 37 and their 7 children, Marie, age 17, Arthur, age 16, Carrie, age 12, Maybell, age 7, James, age 4, Raymond, age 2, and Mary Lou, 4 months old. Shortly before Christmas, Charles took his entire family into town and instructed them to buy new clothes and have a portrait done of the 9 person family. Charles also took a trip to the bank and withdrew all the money in his account, which was only around $60. This was unusual behavior for the working-class family but not too much thought was put into it by the community.

On the afternoon of December 25, 1929, in Germaton, North Carolina, Charles sent his son Arthur into town to, very ironically, purchase ammunition while the rest of the Lawson family carried on with their normal Christmas activities. Shortly thereafter, as 2 of his daughters, Carrie and Maybell, made their way to their aunt and uncle’s house Charles waited for them down the road by their tobacco barn. As they got in range, he shot them both with a 12-gauge shotgun, then bludgeoned them to ensure their death. Their bodies were placed in the tobacco barn to risk the discovery of them as he continued his vile plans.

When he returned home from this, he shot his wife Fannie, who was outside on the porch. The shot was heard by the remaining children in the house and struck terror in them which caused James and Raymond to run and hide. Charles made his way inside and quickly shot Marie, his eldest daughter, who had just finished baking a Christmas cake which would never be served to the family. He then found, shot and killed his sons James and Raymond before bludgeoning young Mary Lou to death. Leaving Arthur as the only living member of the family.

After completing all of this, Charles retreated into the nearby woods with 2 shotguns and the family dogs, Sam and Queen. After pacing around a tree for a few hours, Charles shot and killed himself. The shots rang out in the town and were heard by a crowd gathering at the house of the already discovered bodies of the family. Officers standing with Arthur rushed to the woods and discovered Charles’ body with 2 notes in his pocket, one reading “Trouble can cause…” and the other “No one to blame.”They also recovered the money Charles previously pulled from the bank and used it towards funeral funds to bury the family.

There are many theories surrounding the murders and why Charles committed this heinous act. The most believed and supported being that Charles had received a head injury on his farm shortly before Christmas time and had not been the same since. Neighbors and friends reported that Charles had been acting strangely in the weeks following the injury and leading up to Christmas day. After his death, an autopsy and analysis was conducted on his brain, but to their surprise, they found no abnormalities. Another theory with lots of evidence to support it, is the theory that Charles’ eldest daughter Marie, was pregnant by her father, Charles. Marie had a boyfriend at the time of her murder and had reportedly told her boyfriend, some friends, and neighbors that she was pregnant. After the family’s death, one of her closest friends revealed that Marie claimed the baby was her fathers, not her boyfriends. Shortly before the murders, Charles’ wife had also confided in a close friend that she had worries of an incestuous relationship between Marie and Charles.

As for what happened to the lone survivor of the family, Arthur who was merely 16 at the time of the murders attempted to continue forward with his life. After efforts to keep the farm for himself, he eventually lost it and later picked up an unhealthy drinking habit as a result of the trauma. He unfortunately died in an automobile accident at the age of 32, after drinking behind the wheel; leaving behind a wife and four children of his own. Arthur was buried next to the rest of his family.

Currently, the family’s home is a tourist attraction for all to see, with each day bringing in new people to view the horrors within the walls. The owners of the museum have tried their best to keep every original item in good condition, even the cake Marie made for her family is used as a souvenir of the massacre. This tragic event has made its mark in American history and is still haunting to those who read about it. Although these murders will forever be a mystery to us and the reason behind them has gone to the grave, we do know that an innocent family was robbed of the chance at a beautiful life.