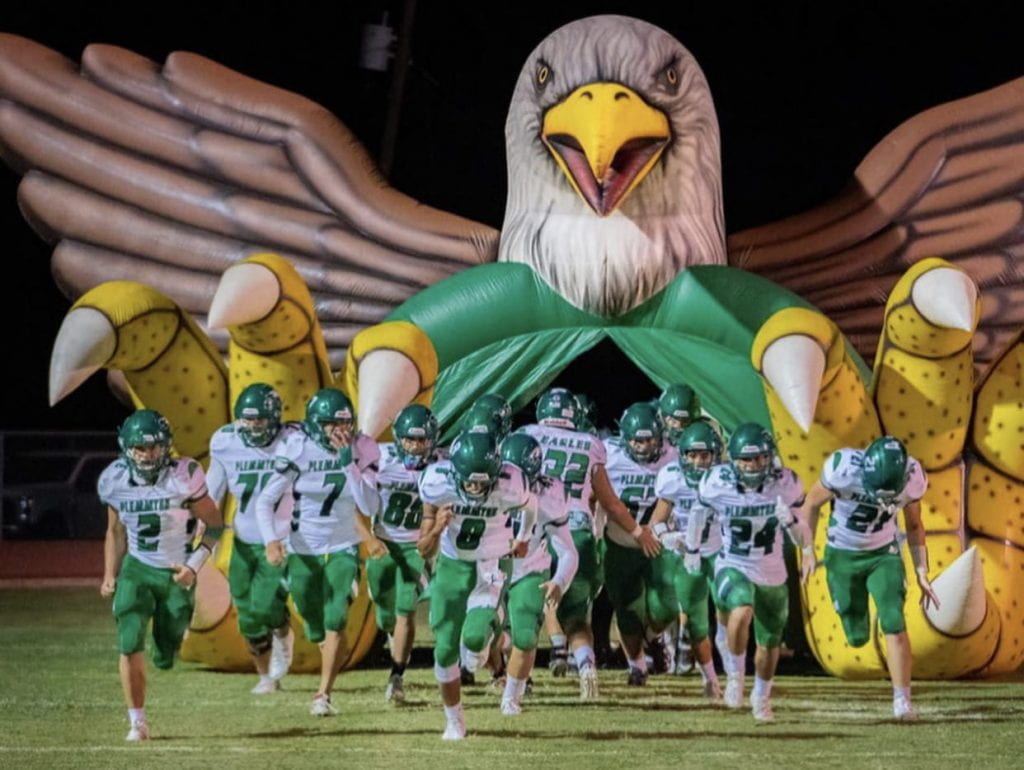 The Pleasanton Eagles excitedly rush out of the Eagle to begin the game.

On October 30, the Pleasanton Varsity football team traveled to Somerset to face the Bulldogs. The Eagles battled hard, but came just short of a win. Somerset came with power and were leading 20-0 after the first quarter. At halftime, the score sat at 20-14 with Somerset still in the lead. After an intense fight during the 3rd and 4th quarter, the game ended with a final score of 29-27, Pleasanton falling to Somerset. Leading offensively were JJ Morales and Diego Luna, with a touchdown a piece, as well as Sean Ramos with 2 rushing touchdowns and 2 passing touchdowns.

On November 6, the Pleasanton Varsity football team partook in their last district game of the season against the La Vernia Bears. After a long and hard fight through all 4 quarters, the Eagles fell to La Vernia with a finishing score of 42-0. Some outstanding players from this game include Carlos Garcia with 17 tackles, Tommy Lee Ramirez, Cole Wiechring, and Toby Garner.

Despite the outcome of the La Vernia game, the varsity Eagles football team will be advancing into the playoffs for the first time since 2017!

On Friday, November 13, the Pleasanton Eagles faced the Austin LBJ Jaguars in the bi-district playoff game of the 2020 playoffs. After a tough fight through all 4 quarters, the Eagles fell 61-0. Sadly, this concluded the Eagles tough season and ended the seniors high school football career.

While this has been a crazy season with both its ups and its downs, the head coach, Coach Liska, is very proud of his boys performance this year. “I am most proud of the boys who played football this year and stayed with us the entire season. Also, for making the playoffs after a 0-4 start to the season.”

While this season hasn’t 100% gone as hoped, Liska believes the team has improved a significant amount this year and will only continue improving in the future. “Sticking together,” Coach says, “At times during the year we had a choice to fold up the tent or to try and make the playoffs. WE trusted each other and stuck together to gain a playoff spot.” With all of this in mind, when asked about his thoughts and outlooks on this season, Liska stated, “In the months of April through July the uncertainty of us even having a football season due to Covid-19 pandemic was mentally, emotionally, and physically draining. The message was to stay positive and be flexible! The Covid-19 protocols were changing daily and we had to be able to adjust and adapt. We were blessed to be able to start practice in August and play all 10 games.”

As the football season comes to an end, Coach Liska leaves the team with these words, “In life you will face adversity and things don’t always go as planned… but you have to pull up your britches, wipe your nose and do the best you can. Congratulations you survived a pandemic. MASK UP!” We will continue to be proud of the boys performance and their strength concluding this year. Amazing job this season and we can’t wait to see you return next year. Pride! Pride!