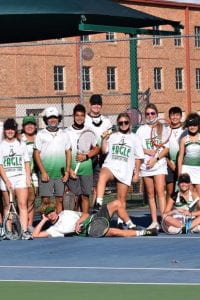 The Eagles’ varsity tennis team has officially ended their fall seasons after competing in the bi-district tournament at Boerne on October 27.

This season, the Eagles had to push hard to get their wins. “Since we’ve been out in a new district, we played some tougher competition. But overall, I’m proud of how well our team did this season,” said senior Blake Moos.

Despite their struggles, the team kept pushing through the season and participated in the Bi-District tournament at Boerne on October 27. The Eagles had to play their hardest to attempt to beat their opponents. Sadly, they fell short of moving on to the area tournament.

When asked about his opinion on the results, Coach Schwab was very proud. “I think we were up against an incredible first place team in Boerne, and the results were as expected. We knew going in what the results were probably going to be, and we just got a chance to play some more tennis and learn and gain some more experience against a quality team, and that’s what we got.”

Now that the fall season is over, players and coaches have had a chance to look back on their performance and look forward to the future. Looking back on the season and the performance of the players, Coach Schwab said, “I think based on the district we were in and the age of our team, I think we did an excellent job. We finished fourth in district, and we got the chance to play post-district play. The players played a great season and I am pleased with how they finished.” Interview answers from players.” Despite the rough season, Coach Schwab is ready to get back in the game with the Spring season. “Right now we’re doing relaxed practices just to keep in tune, and then when we come back in the Spring we’ll do our 8 Spring tournaments in preparation for the District tournament, and we’ll see where the chips lie.”

Congratulations to the players and coaches on a hard fought season these past few months. Here’s to next season!