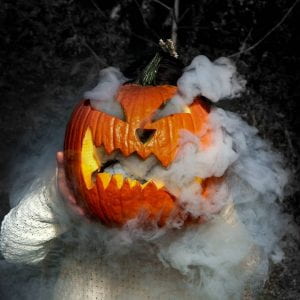 Joan Rabel and Goldyne Pizer sat quietly parked outside a home located in Sun Valley. The pair waited in silence as they watched the lights go out. It was time to strike.

Rabel whispered under her breath to Goldyn, “Alright, do it” Goldyn then exited the car  dressed in jeans, a khaki coat, red gloves, and heavy makeup that she covered up with a domino mask. She walked directly to the home and stood there for a few seconds before ringing the doorbell.

Peter Fabiano awoken when the doorbell rang. He looked at the clock and questioned why someone would be here at this time of night. As he walked down the stairs it occurred to him that it might be a late trick-or-treater, so he grabbed the bowl of candy on the table and opened the door. He looked at the mysterious black figure and asked, “It’s a little late for this, isn’t it?”

“No,” was the last word Peter Fabiano ever heard as Pizer lifted a brown paper bag and shot Fabiano. Pizer didn’t wait to see if Peter was dead, or if anyone had seen her. She ran back to the car where Rabel was waiting.

As Pizer got in, Rabel leaned over and kissed her, saying, “Thank you.” The two women left and quickly burned the clothes they were wearing in case they contained any trace evidence. Afterwards, they returned the getaway car to the friend they had borrowed from earlier that day. When the two women had completed their mission, Rabel said to Pizer. “Forget you ever knew me.” Then they went their separate ways.

The next day Pizer realized she still had the gun, so she rented a locker at a Downtown LA department store and kept it there where she thought it would be safest.

The loud boom woke his sleeping wife, Betty Fabiano, she quickly ran downstairs only to find her husband barely breathing.

Betty ran to her police officer neighbour’s home, who called in the Valley police department. Peter was taken to Sun Valley hospital, where he was pronounced dead from the gunshot to his chest.

It took a few days for Betty to compose herself but soon she did and was able to speak with the police. She told them that she heard two voices coming from downstairs, a man, and someone that sounded like a man pretending to be a woman.

Police initial thought was that this was the work of a gang. It was not uncommon for a random gang killing to occur during those hours of the night, although they didn’t think Peter Fabiano had relations with any gangs since he was just an owner of a successful salon.

When questioned about who would want to harm Mr. Fabiano, Betty knew exactly who was responsible. She told police she believed it was an “ex-friend” Joan Rabel.

After weeks of no leads and a cold trail, law enforcement finally caught a break when a gun had been found in a locker at a department store. A ballistics test confirmed a match to the gun found to the bullet fired into Peter Fabiano. The police soon learned that this gun belonged to Goldyne Pizer.

On November 12, Pizer was arrested in connection to Peter Fabiano’s death.  In the interrogation room, she confessed to everything, telling police that it was all Rabel’s idea. Rabel had coerced her into killing Peter; she didn’t even know the man. They then interrogated Rabel, but she refused to tell the truth and insisted that she knew nothing about the crime. The police got a warrant after hours of interviewing her and getting nowhere.

The murder weapon, she said, had been bought with money Rabel had given her. Pizer told how they had been planning the murder for weeks. The two of them had driven by Fabiano’s home before, and Rabel had pointed out Peter to her, so she would recognize him when the time came.

What was The Reasoning Behind The Murder?

Peter and Betty Fabiano met in the late 1940’s while living in New York. Peter left the Marines and began trucking when he first laid eyes on Betty, a new divorcee with two kids. They quickly married soon after.

The four of them then moved to LA and opened up two beauty salons; at one of these salons Joan Rabel was hired. This is how she came into the picture.

As the business began to grow, Betty and Peter’s marriage fell apart. It soon was a loveless marriage. This turmoil caused Betty to move into Rabel’s home.

When they moved in together people started to make note of the close relationship of the two girls; but this was the 50s, so no one would have thought the two were a couple.

Word eventually got around to Peter which turned out to be enough fuel to motivate him to fix his marriage. Betty vowed that she would never see Rabel again.

Soon after Betty went back to Peter, Rabel realized that her girlfriend was serious about fixing her marriage. Soon after she had lost Betty, Rabel found Pizer and started telling her how horrible of a man Peter Fabiano was and that he had to die.

Before their trial started in December, both women had to meet with three psychiatrists. The courts seemed to believe that due to their relationship with each other, the trials could be corrupt. Pizer was very open with the psychiatrist as she had been with the police. She was quoted saying, “I had no motive, personally. Whatever motive I had was to please Joan. I was always easily influenced. I have been impressionable and always trusting.” Rabel on the other hand never spoke a word and declined to testify.

Pizer got on the stand and told the events of what happened that night. Rabel refused to tell the truth, but was seen smiling when Pizer was giving her tearful testimony. Both women were charged with first-degree murder, but through a plea deal, it was reduced to second-degree murder. Each woman was sentenced to 5 years to life in prison though they were eventually released. Afterwards, Rabel and Pizer changed their names and were never heard of again. A short crime for the cold murder of an innocent man.