By: Kristina Mertz
Many tell of the old folk tale known as The Donkey Lady, in this tale she haunts Donkey Lady Bridge on Applewhite road in San Antonio. To you, the name of the bridge might seem laughable, however, the name has a sinister backstory that has a spine-chilling fateful end.

The tale is so ancient, that nobody knows the true story, however it has been around long enough to have many versions. Supposedly, the story starts with a family of farmers who lived just outside of San Antonio. The father of the family, murdered all of his children and set his house on fire. Instead of killing his wife he left her horribly disfigured. Because of the fire, her hands were melted down to stumps, which resembled donkey-like hooves. The skin on her face was so charred it looked almost elongated adding to the donkey like appearance. As the Donkey Lady grieves the loss of her children and seethes with the sting of betrayal from her husband, she haunts Elm Creek and those who try to cross. 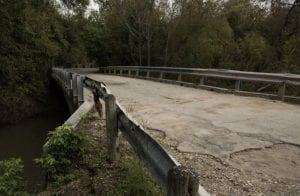 The Donkey Lady is a very popular tale all across the San Antonio area. Numerous people try to explore the area to see if they can catch even a glimpse of her infamous spirit. There are real life stories of experiences where people have had the feeling of being watched, but others say they saw something out there. Some hear the clapping of hooves when they visit, while other people claim to have seen a woman with a donkey-like face peering back through the car window. The best way to get her attention is by honking your car horn.

If you ever get the lucky or unlucky chance of visiting The Donkey Lady Bridge over Elm Creek in San Antonio, make sure to keep an eye out for her, she’s always watching.