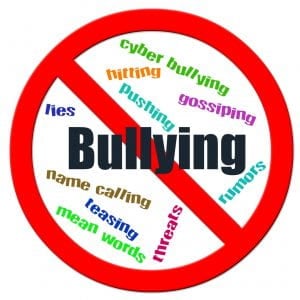 Every October, communities and schools across the world join and work together in hopes of putting an end to all forms of bullying. During this month, many campaigns, protests, and new resources are aimed at raising awareness towards bullying. This aggressive and constant behavior should not go unrecognized.

Bullying includes actions such as making threats, spreading rumors, or attacking someone physically or verbally. One of the most effective forms of bullying today is done online and is known as cyber-bullying. About 20% of students ages 12-18 have experienced bullying nationwide, and 15% reported to have been getting bullied online and harassed. Research indicates that consistent bullying can lead victims to suicidal behavior. All states have anti-bully legislation, but bullying is not illegal and continues to be a common occurrence.

Every week of October, the National Bullying Prevention committee releases new challenges around the world to help prevent bullying from occurring. Some of which include: making friends with someone you don’t know at school, standing up for others, and spreading kindness to those around you. This year they also ask that school’s and local businesses wear orange in hopes of sending a message to “stomp out bullying,”

This October, try your best to join in on these challenges and show your support to prevent bullying. If you or anyone else you know is going through bullying, reach out to a trusted adult and confide in them. Wear your orange and help create a world without bullying!