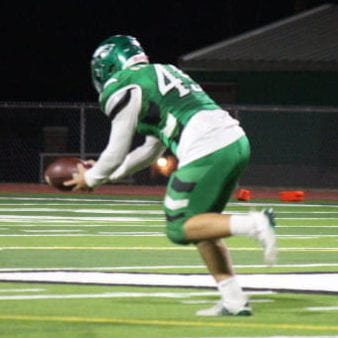 Senior Ty Hehman caught an interception in the 4th quarter

Ending September with a win by the Pleasanton Eagles against Corpus Christi King 24-6, the first quarter started off slow but rapidly changed when Toby Garner scored 2 touchdowns in the second half. During the third quarter, Toby Garner scored another touchdown followed by a field goal by Jose Angel Perez making the eagle up 24-0. The last quarter ended with Corpus Christi scoring one touchdown and making the final score 24-6 with a win by the Pleasanton Eagles.

The Eagles started October with their first district game against Boerne. The first half started slow with Boerne scoring 2 points. The second half, Boerne got up 22 points and scored 3 touchdowns. The Pleasanton Eagles scored two touchdowns in the third quarter and both were made by Toby Garner. Borene also made two touchdowns in the third quarter making the score 38-14. Jayden Palacios made a receiving touchdown, and Boerne as well made a touchdown. Making the final score 45-20 with loss by the eagles.

On Friday October 23rd, the Eagles had a home game against Uvalde. The eagles led the way starting with two interceptions made by Marco Quinonez. Ty Hehman, came with another interception for the eagles, and Ashon Thompson with an interception and a touchdown. Sean Ramos, threw two touchdown passes. Finally, Toby Garner made 2 touchdowns to finish the game with an amazing score of 30-7.