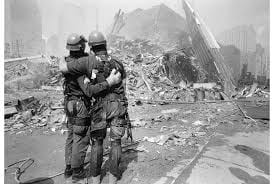 Two first responders comfort each other as they look at the chaos.

At 5:45 A.M. Hijackers Mohamed Atta and Abdul Aziz al-Omari pass through security at Portland International jetport in Maine. The pair aboard a commuter flight to Boston Logan International Airport, where they would then connect to American Airlines Flight 11.

7:35 A.M. Passengers, including five hijackers, board Flight 11 at Gate B32 in Logan International Airport, Boston.

8:14 and 8:15 A.M. The terrorist attack and kill pilot Captain John Ogonowski and First Officer Thomas McGuinness of Flight 11 and take control of the aircraft. At this time 51 passengers and 5 hijackers (Marwan al-Shehhi, Fayez Banihammad, Mohand al-Shehri, Hamza al-Ghamdi and Ahmed al-Ghamdi) board another flight.

8:46 A.M. The first plane crashes. American Airlines Flight 11 strikes the North Tower of the World Trade Center, traveling at hundreds of miles per hour and carrying around 10,000 gallons of jet fuel. The flight crashes into floors 93-99 and severs all three emergency stairwells, trapping hundreds of people above the 91st floor.

9:03 A.M. The second plane crashes. United Flight 175 strikes the South Tower on floors 77-85. Two of the three emergency stairwells are rendered impassable and most elevator cables in the area are severed by the crash, trapping many on floors above the impact and in elevators.

9:59 A.M. The south tower of the World Trade Center collapses from top to bottom. It had been covered with flames for about 56 minutes. Over 800 workers, including first responders, died during this time.

10:03 A.M. Passengers on Flight 93 take down the four hijackers in the cockpit and crash land it into a field near Shanksville, Somerset County, Pennsylvania, killing all 33 passengers and seven crew members on board.

It has been 19 years since this tragedy has occurred. While it forever left America scarred with a taunting message, we still continue to honor those who died and those who gave their lives. We will never forget 9/11.