“A person who is outgoing, full of confidence, and who does not allow mistakes to keep him from going forward,” is, according to Mr. Roberson, how some would describe Justin Veale. We students at PHS often gossip and talk about the negative things going on in our campus, instead of focusing on the positive things, or in this case people.

If you have ever had the pleasure of going to a PHS football game this year, you would most certainly see an exuberant boy yelling on the sideline, telling everybody to keep up the good work. Walking in the hallways, you might often see Justin with a big smile on his face as he fist-bumps all of his friends. To others this might seem strange, however it just goes to show how much of a difference one individual can make. Mr. Roberson says, “Justin is the type of person that holds people accountable to expectations and at the same time does it with a positive and energetic personality….I have known Justin for a little over a year… even though I did not have any personal interactions with him until the beginning of this school year. He was a student that I first noticed on the football field last year… and even though he was injured, he was limping up and down the field, hyping people up, encouraging people to get better, and just being a great team member. So before we had any interaction, he had made a positive impression on me, because of how he handled himself around his peers.” He explains,“Justin exhibits the characteristics that I would hope to see in any young man. He might make some “not so smart” decisions at times, but for the most part, he is respectful and pushes people to be better.” 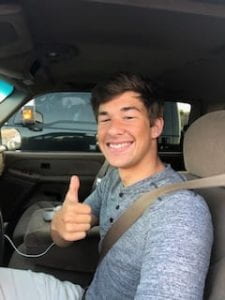 Justin Veale being a proud student at PHS with a thumbs up.

Justin Veale was born in Seguin, Texas and he moved to Pleasanton when he was in first grade. His favorite part about being a student at PHS is, “…everyone being together and talking and knowing everyone around town.” He is an active member in Student Council, the Pleasanton Track Team, and the Pleasanton Varsity Football Team. Justin says he likes to make people laugh, “cause it’s funny… I like seeing other people smile and I like being the center of attention and knowing that I can impact someone’s day.” Justin’s favorite teacher is Mr. Roberson, “he’s like really involved with the class and everything.” He says his hobbies include, “playing football and I’m not gonna lie, I still like playing with LEGOS.” When asked what he plans to do after graduating, he said, “honestly, I’ve got no clue. If I go to college then I’ll go to college, but if not then I’ll get a job.” If anyone at PHS needs advice, he recommends, “Keep your head up cause it can always get better.”

Kelly Mertz, a junior this year says, “I’ve grown up with Justin, and he is very good with welcoming new people. He’s very good at creating a comfortable environment and he’s a very kind guy.” She added, “I’ve known Justin since third grade, I can still recall walking into a scary daycare and not being able to know where to go… Justin was the first guy to come up to me… he was my first friend here in Pleasanton.” Kelly said the best thing about Justin is, “he just… he makes people feel special and he can always make somebody’s day better than it was.”

Justin is an influential and very significant person here at PHS, who will always be remembered for bringing the most positivity we could ever ask for.