By: Kristina Mertz and Victoria Chavez

During the mid-1600s, women were suffering through the problem of abusive husbands. Bright young women trapped in a loveless marriage were left with only one way out, that being death. However, a woman named Tofana changed the lives of many women and cut short the lives of over 800 men.

During the 17th century, Tofana owned a “cosmetics line” called Aqua Tofana that was laced with a self-made concoction of arsenic, lead, and belladonna (Deadly Nightshade). She helped hide the poison inconspicuously in the forms of powdered makeup or small bottles embellished with pictures of Saint Nicholas and Bari. This resulted in the idea that something so saintly could never have poison in it to kill people. The women who bought these products were mainly in bad marriages with abusive husbands or an abundance of forced marriages. Many women would spread the doses out to their husbands to avoid the suspicion of being poisoned. It was very easy to distribute the liquid poison into foods and drinks.

Tofana had many apothecaries, entrepreneurs, and innovation skills. Due to her dappling in the apothecary, she was able to create a poison that couldn’t be found in the bloodstream. This helped the distribution of the mixture because the women who committed the crimes could remain guilt-free. When a medical professional would perform an autopsy on the dead husbands, there would be no remains of the poison. All the wives would have to do was act the part of a grieving widow, then she could live with the satisfaction of freedom.

The first two doses of the poison left symptoms of nothing more than a basic cold or cough. However, by the third dose, the husband would experience vomiting, a burning stomach, and many other digestion problems, but by the fourth dose, the deadly deed was completed. She ended up selling this product for over 50 years, which contributed to her gain of income.

However, by the 1650s, one of Tofana’s customers had a change of heart and decided to cancel her plans to end her husband’s life, even though she already put the poison in a bowl of his soup. The husband then became increasingly suspicious over time and finally questioned her behavior. The wife confessed to everything she did, which resulted in the husband turning her in. The wife was interrogated and most likely tortured, to which she revealed who she bought the deadly poison.

There are many different versions of the story as to what happened to Tofana: Some say she was retired to the country when she was warned, so she fled. Others believe she ran, but her employees including her daughter were killed. The most widely believed story details her running to a nearby church, where she was found and faced execution along with her daughter, and three employees. Numerous buyers were also punished. The lucky customers did a good job of convincing, swearing that they only bought the products for cosmetic purposes. The others that weren’t so lucky were either thrown into prison or executed. Some of her accomplices were entombed in the Palazzo Pucci Dungeons, while the unfortunate ones were sealed within the walls of the dungeon with no exits. These women later died from dehydration and starvation. A lot of the richer women were “quietly” executed by beheading, burning, crushing, boiling, and hanging.

Guilia Tofana became known as one of the most successful serial offenders, not only in France but in global history. What she did may be perceived as unjust, but many individuals beg to differ and ask the same question: Did she really commit a crime? 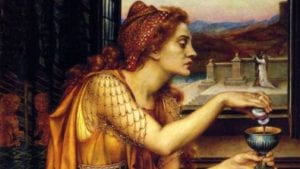